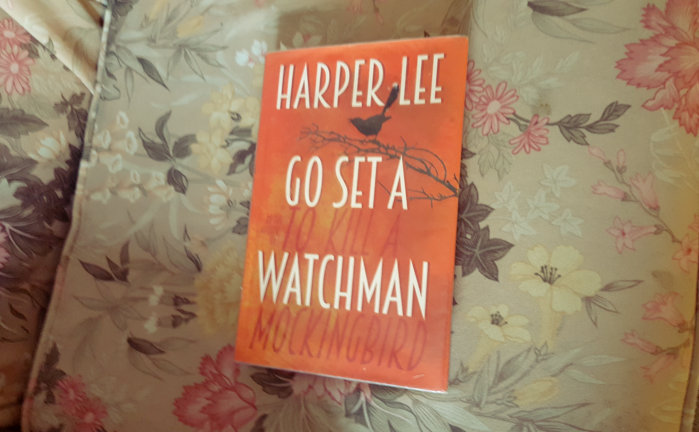 ‘Hell is eternal apartness. What had she done that she must spend the rest of her years reaching out with yearning for them, making secret trips to long ago, making no journey to the present? I am their blood and bones, I have dug in this ground, this is my home. But I am not their blood, the ground doesn’t care who digs it, I am a stranger at a cocktail party.’

There must be a whole slew of people who read To Kill A Mockingbird in school as children, and then read Go Set A Watchman as adults. So I know my experience can’t be unique with these books. I have been meaning to read this since it came out in 2015 but had all intentions of re-reading TKAM again first. That didn’t happen. But I don’t think it mattered in the end.

I don’t know whether I have perhaps over-simplified TKAM in my mind but it felt so clear in its depictions of right and wrong, perhaps from Scout’s childish innocence and the pedestal that Atticus is put on. So GSAW feels more grown up, more nuanced.  The characters have developed into 3D and flawed human beings and Scout’s idealism and fervour resonated with me so much (who here wasn’t an angry, blinkered 20-something, determined that they were right??)

According to some accounts, GSAW was a rough manuscript, written in the 1950’s, before TKAM, dug out of obscurity by a Ms. Carter who acted as Harper Lee’s personal representative. To me, when the book was written is important, as I found a lot of the vernacular quite hard to read. If this was written in the 1950’s and represented attitudes at that time, then I would understand Lee’s use of language more, even if it didn’t make it more palatable to me. Did anyone else have a similar response?

I am a delicate flower when it comes to books and tend to skim past things that upset me, although I am trying to break that habit. So obviously, some of the views portrayed by the main characters in this book cut me to the core, but I’m sure that was Lee’s intention. What better way to show Scouts development into adulthood than the fall of her hero?

This book is short and powerful, and I think it should be compulsory reading (alongside TKAM) in schools. There, I said it.

It’s taken me a week to write this; I felt so conflicted by the language and how divisive it has been (check out the Goodreads comments here) but I think that it’s an important lesson in the hurt and fear in the South and that well-meaning liberal-minded people can be as narrow-minded as those they oppose.

Thanks, Dr Finch, for reminding me of what a dick I was in my teens and 20’s. An important lesson learnt.