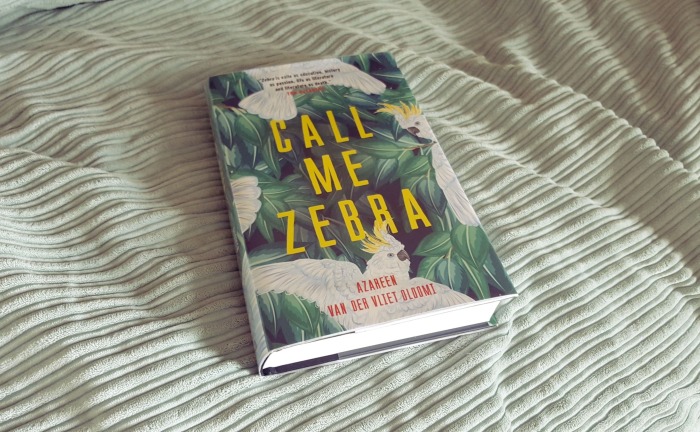 ‘My father pounded his cane against the walls of my void as he laughed. My paper heart crinkled in response. The sound of his laughter was a balm to my wounds’

I entirely judged the book by its cover on this one, Team. It was alone on a ‘featured books’ shelf at Splott Library and it’s called to me with its name and its colourful cover. I picked it up because it looked beautiful, I read it because it felt beautiful. I’m a sucker for good quality paper. I felt like I was the first person to borrow this book. It was box-fresh.

Call Me Zebra is pretty indescribable so apologies, this will just be a gushy review about how much I loved it, with very little content. The whole book speaks of an experience I know nothing about; the idea of being rootless and exiled. But its told in such a way that your lack of knowledge of this experience doesn’t matter. They way she describes the fathomlessness of loss and grief was exceptional. And I just loved the way her ancestors guided her and spoke to her. Like grown-up Lion King.

It could so easily be pretentious, with all of its literary focus but it really isn’t. I know that people have found it to be entirely pretentious, but I think you have to accept early on that you won’t know every single literary reference and just need to go with it. I haven’t read half of the books that are quoted but the human experience that she discusses are universal and easy to relate to.

I shouldn’t have looked at Goodreads as I feel fiercely protective of Zebra and love her like a slightly unhinged but kind-hearted sister. I get it, Zebra can be quite out-there but I never thought that it goes too far off the rails. I’ve definitely read books that are far more up their own arse than this one (ahem, Twilight of the Eastern Gods). I just loved Zebra’s spirit and chutzpah and all that. She’s fab and I want to be her friend, even though she’s the sort of friend that you would have to apologise for a lot, and keep away from the good wine.

I’ll shut up now because I’m so clearly biased on this one and have nothing to criticise it for. Read it. But contrary to all of my pleas for comments, please don’t tell me if you don’t like Zebra. It will hurt my feelings and I’ll never get over it.