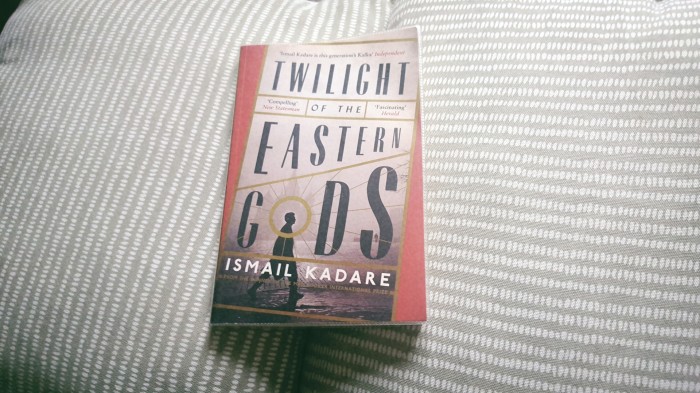 ‘Artashez Pogosian, nicknamed ‘The Masses in Their Tens of Millions’ because he identified with them all at the drop of a hat, apparently delighted to have dumped his wife, swept in with the other students from the Caucasus. They were all drunk, except Shogentsukov, who had come on his own on a later train, and turned up looking slightly drained, his face exhibiting what Pogosian jokingly called his post-prime-ministerial melancholy.’

Not a favourite quote by any means. More of an example. This paragraph makes no more sense if you’ve read the book than it does on its own.

I feel so ‘meh’ about this book, I very nearly didn’t do a review. Or even finish it. But I was away for work this week and knew it would help me to sleep.

I was so up for it, based on the blurb, but it turns out that I can’t relate in any way to a young Albanian writer living in Russia in the late 50’s. He’s terribly angsty. I was also interested just because it translated from French into English from its original language (Russian/Albanian?) and I thought it would be so very worldly of me. Nah.

There’s a lot of Russian names thrown around haphazardly, but I’m sure that if I was more into it, I could have made more of an effort to follow then. But nah. Even with a genuinely interesting Introduction, written by the translator, David Bellos, it still lost me more often than not. The narrative just wasn’t engaging enough to encourage me to struggle through the Russia names, places and assumed prior knowledge.

I would recommend if you have a very specific interest in mid-century, Soviet Union authors. I mean, its not a long book, like, under 200 pages, so if you fancy it, why not give it a crack. It helped to put me to sleep regularly over the last week. Even At 4pm on a Sunday.